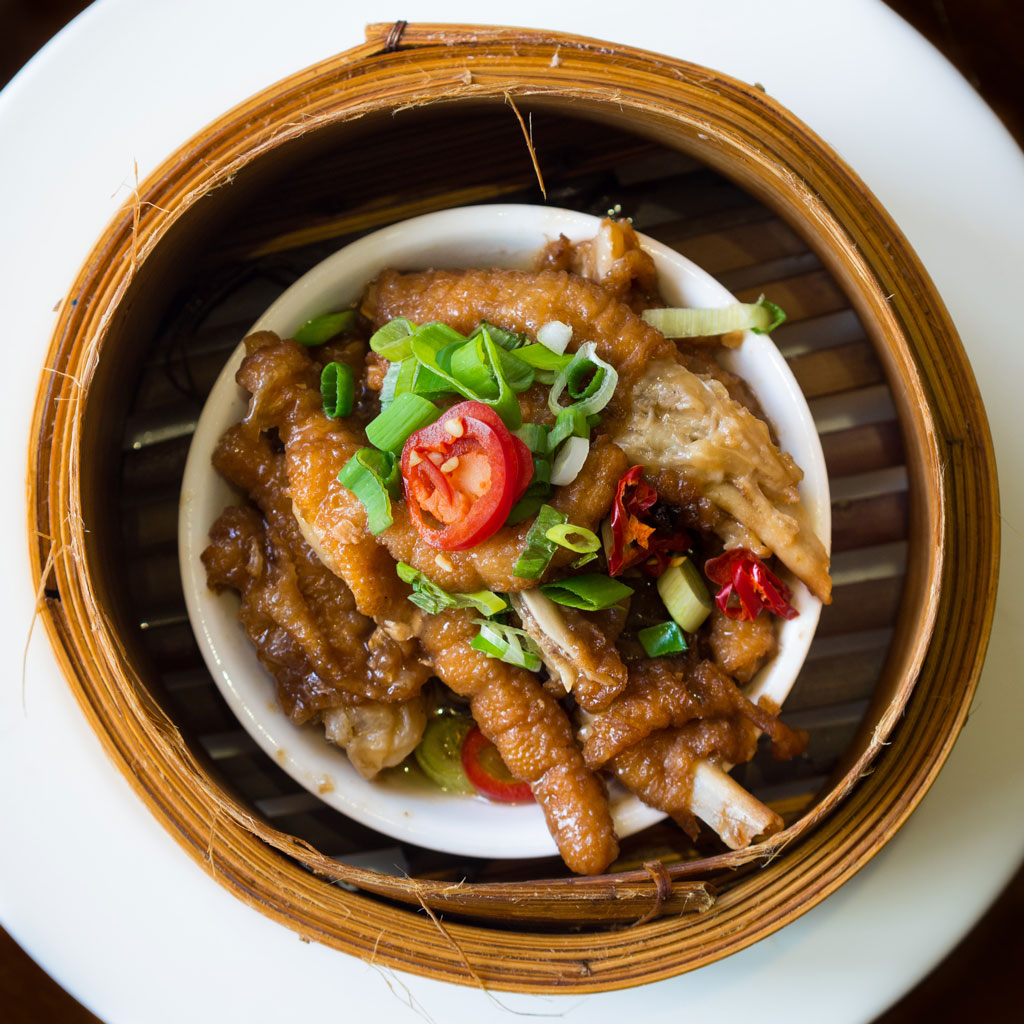 Chicken feet are a part of the chicken that is cooked in Brazil, Cambodia, China, Ecuador, Indonesia, Italy, Jamaica, Korea, Laos, Malaysia, Mexico, Moldova, Nepal, Peru, Philippines, Romania, Russia, South Africa,Zimbabwe, Thailand, Nigeria, Trinidad and Tobago, Ukraine, Bolivia, Dominican Republic and Vietnam. After an outer layer of thin skin is removed, most of the edible tissue on the feet consists of skin and tendons, with no muscle. This gives the feet a distinct texture different from the rest of the chicken’s meat. Being mostly skin, chicken feet are very gelatinous.

In Guangdong and Hong Kong,[1] they are typically deep fried and steamed first to make them puffy before being stewed and simmered in a sauce flavoured with black fermented beans, bean paste, and sugar;[2] or in abalone sauce. 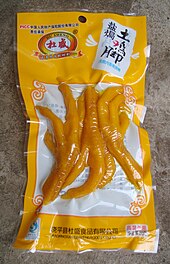 In mainland China, popular snack bars specializing in marinated food such as yabozi (duck’s necks) also sell lu ji zhua (鹵雞爪, marinated chicken feet), which are simmered with soy sauce, Sichuanese peppercorn, clove, garlic, star anise, cinnamon and chili flakes. Today, packaged chicken feet are sold in most grocery stores and supermarkets in China as a snack, often seasoned with rice vinegar and chili. Another popular recipe is bai yun feng zhao (白雲鳯爪), which is marinated in a sauce of rice vinegar, rice wine flavored with sugar, salt, and minced ginger for an extended period of time and served as a cold dish. In southern China, they also cook chicken feet with raw peanuts to make a thin soup.

The huge demand in China raises the price of chicken feet, which are often used as fodder in other countries. As of June 2011, 1 kg of raw chicken feet costs around 12 to 16 yuan in China, compared to 11–12 yuan for 1 kg of frozen chicken breast. In 2000, Hong Kong, once the largest entrepôt for shipping chicken feet from over 30 countries, traded a total of 420,000 tons of chicken feet at the value of US$230 million.[3] Two years after joining the WTO in 2001, China approved the direct import of American chicken feet, and since then China has been the major destination of chicken feet from around the globe.[3]

Aside from chicken feet, duck feet are also popular.[4] Duck feet with mustard, which is often served with vinegar, fresh green pepper and crushed garlic, is a popular salad/appetizer.